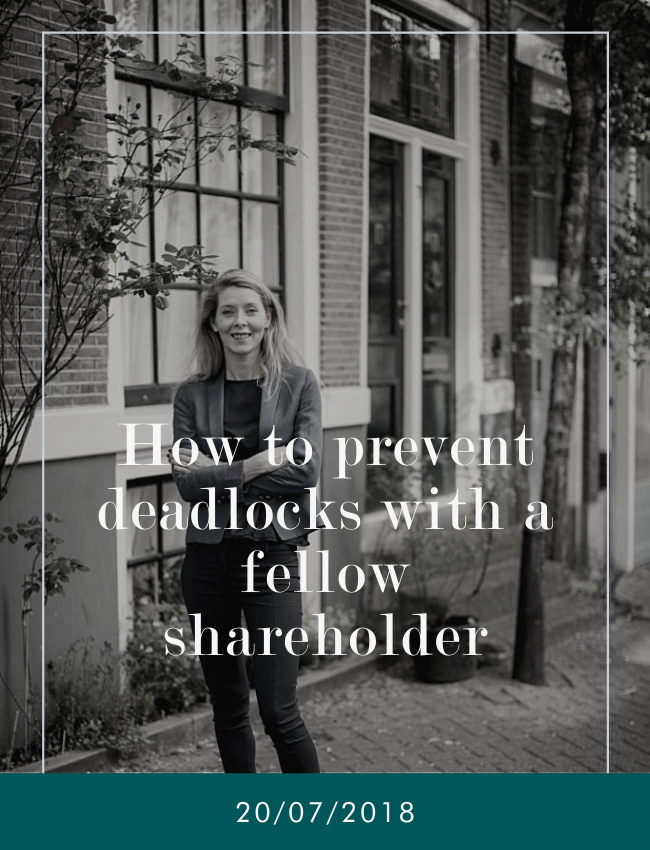 How to prevent deadlocks with a fellow shareholder

While doing business, it may occur that differences of opinion arise on what direction the company is going to go or what is to be expected from fellow shareholders. Sometimes, this may even lead to conflicts, and, in the event that the team of shareholders is divided on the issue, deadlock.

Though contracts cannot prevent conflicts at all times, diligently considering potential issues and scenarios, discussing these topics and putting some arrangement in writing before starting a joint venture corporation may be a good help and at least prevent unnecessary escalation of a conflict.

For each situation, it is advisable to consider whether it qualifies as an exit-scenario and what its consequences would be. Is a director supposed to resign? Is a shareholder obliged to offer his shares for sale? If so, how it will affect the valuation of the company, in other words, how will the purchase price of such shares be determined and how will payment be arranged?

The latter is often stipulated in a  valuation clause which determines the way the price of the shares to be offered is establishes. Such clauses may include a certain price determining method, a specific price, or a formula to calculate the value of the company at a given moment.

Some agreements explicitly mark the difference between a good leaver and a bad leaver. This difference can be quite relevant for the abovementioned valuation clause. For example, in some cases a shareholder that is obliged to leave for cause, because (as far as the other shareholders are concerned), this shareholder has not acted in the best interest of the company by breaching a non-compete clause or a secrecy clause.

In such cases, for a bad leaver a so-called penalty discount may apply – meaning that the price for the sales to be offered is equal to the predetermined valuation method minus a reduction as punishment for the leaving shareholders.

This principle can be challenged when a third party wishes to take over (part of the) shares of a BV. Such a situation may cause discussion amongst the group of shareholders, specifically if they have different views on the future of the company.

There are many sorts of undesirable situations that may lead to a conflict. Some  situations can be discussed in advance, and written down in a shareholders’ agreement so that it provides a plan of action when one of the situations occur. Claws can help you in different ways to prevent escalating conflicts – in moderating talks between shareholders to set up their collaboration or in the negotiation process of a departure. We can also assist in putting scenarios and clauses in writing in a shareholders’ agreement.