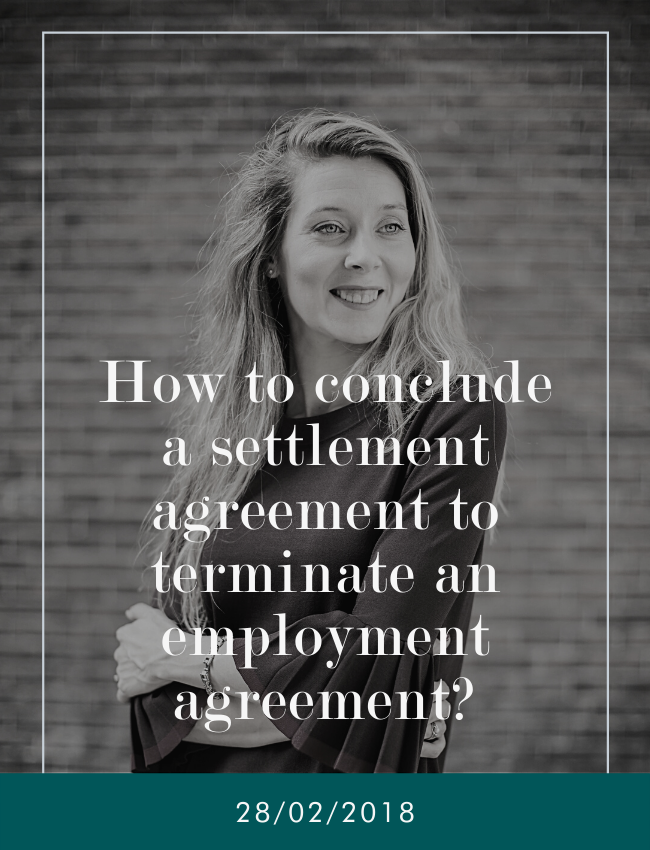 Note: a settlement agreement is only valid if put in writing and signed by both employer and employee.

Since a settlement is the result of a negotiation process between two parties, it is strongly advised to prepare diligently before entering into that negotiation. Depending on the reason for terminating the contract, digging up the file and reading into the employee’s history and context can be a good start. Putting oneself in the other party’s shoes and considering what would make a good settlement offer can be a helpful step in determining whether the proposal to be made is acceptable and reasonable.

Both parties can seek legal advice to help putting together a decent proposal and / or reviewing a proposal that was made by the employee. Today, more and more negotiations take place at the mediation table (with assistance of legal advisors or without). A mediator is impartial and usually a good help in getting a mutually agreeable outcome of the negotiations (faster).

The closed system of dismissal means that routes for dismissal  are limited to those mentioned in the Dutch Civil Code:

1) expiry of a fixed-term contract

3) termination of the employment agreement by the employer

4) dissolution of the employment agreement by the court.

Normally, upon signing a termination agreement, the employee is still entitled to unemployment benefits (WW). In a settlement agreement, parties can arrange the termination in more details, for example by adding provisions  as exemption from duties until the end date or the non-compete clause.

It is not uncommon to financially compensate the employee when he or she signs the settlement agreement, however, it really depends on the circumstances what is reasonable and what would be a realistic outcome of negotiations. Payment of a severance payment or transition fee is not obliged – though it may very well be inevitable. It may help preventing procedures at the UWV or cantonal judge. Please note that this may depend on the nature of the case.

In a settlement agreement, some specific essential subjects have to be arranged. These are, inter alia the following:

* Always keep the statutory or contractual notice period in mind. Antedating is never a good idea.

If you are trying to come to a settlement agreement but facing a deadlock in negotiations, you can contact us for (inter)mediation in this process.